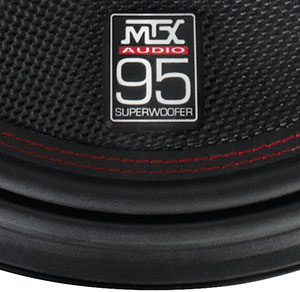 Why MTX Subwoofers? Apex for one...

The surround is the material around the outer edge of the cone connecting it to the basket, allowing the cone to move up and down from its rest position in proportion to the voice coil travel. As you can imagine, the surround design plays a major role in sound quality and performance as it controls the linear travel of the cone. Linear cone travel and solid support at the end of travel is important for accurate music reproduction, keeping notes crisp and true.

Working similarly to the way an accordion compresses, the Inverted Apex Surround is built to fold in at the edges when de-energized, and unfolding to extend up and down as the music starts and amplifier output is applied.

Most subwoofers use the traditional half-roll surround where the cone surface is attached to the basket with material wrapped in a single half circle. The circumference of the half circle provides the length available to extend the cone up or down as the circle extends and straightens, moving the cone surface up and down to generate sound waves. This method served us well for decades until the MTX team developed a better method.

The Inverted Apex Surround design uses four folds to tuck in the extension material using less space around the cone diameter compared to the half-roll design. This surround construction provides the same cone extension distance in about half of the width used by a half-roll surround. This means in a twelve inch subwoofer, you get nearly a half inch more diameter cone surface available to push air and make sound... a significant improvement in quality and volume.

The half-roll surround design has an inherent wrinkling effect on contraction that can create a distortion in the sound. (you can see the wrinkling in the animation) Due to the structural shape of it's arch, and the stiffness of material to maintain the arched shape, the surround collapses somewhat when flexing during play. The Apex offers more flex and less of a single-arched structure that eliminates this distortion, so your music sounds better.